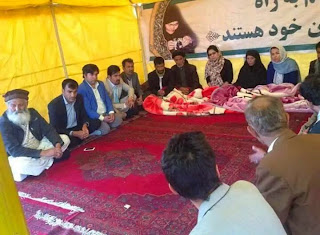 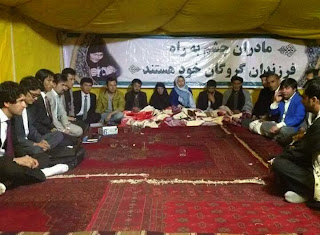 Family members of the Hazara kidnapped victims along with civil society members have set up tents near the Presidential Palace, in protest over the rising number of such incidents in the country and the government’s lack of response to the situation. CEO Abdullah Abdullah has said however that government is doing everything possible to secure the release of the hostages. “These kids and family members are waiting for their friends to come. Government must release them otherwise we will continue our protest,” said Masooma, the mother of one of the hostages. “If government had done something, they would have been released by now, government has not done anything, they must be released,” says Ghulam Hassan, the uncle of one of the hostages. Civil society members have said that the lack of government efforts to release the hostages has concerned them, forcing them to pitch tents near the palace. “The lack of government attention in addressing the (rising) incidents of kidnapping has resulted in further kidnappings and increasing insecurity on the highways of Afghanistan,” says Rahim Jami, a civil society member. “When serious actions are not taken by government, it is obvious that insurgents will take advantage. We are afraid that kidnapping might turn into a culture,” says Munera Yusufzada, a member of a justice seeking group for the release of hostages. The CEO claims however that government has done a lot to secure their release and that it will continue its efforts. “The reason we have not shared the details of our efforts with the public is for the sake of safety of the hostages. If we had shared details, or do so in future, it will have unwanted consequences,” says Abdullah. It has been over a month and half since the kidnapping of 31 bus passengers in Zabul province. In the last two weeks, a further four bus passengers from Sholgara district of Balkh province and nine other bus passengers from Balkhab district of Sarepul province have been kidnapped. There has been no news on their whereabouts to date. However, Muhammad Mohaqeq, second deputy of the CEO, has said that Daesh is kidnapping passengers in order to foster disunity among ethnic groups.