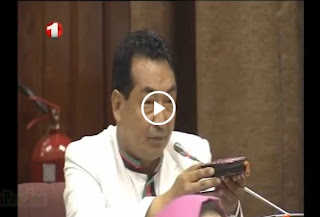 Ramazan Bashardost In Parliament asked nominates for ministries to swear on holy book that the promises they are giving would be practical.Ramzan Bashardost was born in Qarabagh District, Ghazni Province of Afghanistan in a family of a respected government employees, he is fluent in Persian and Pashto. He completed his primary and intermediate education in Qarabagh and later in Maimana, capital of Fariyab in northern Afghanistan. Months after the 1978 coup d’état, Bashardost left Afghanistan for Iran. He finished high school in Iran and then immigrated into Pakistan.In 1983, he left Pakistan for France where he spent more than 20 years, earning degrees in law and political science. In 1989 he enrolled at Grenoble University where he did his Masters in Law. In 1990, he did his Masters in Diplomacy from Paris University. In 1992, he did his Masters in Political Science. In 1995, Bashardost received his Ph.D in Law from France’s Toulouse University. He wrote his thesis on the UN’s role against the Soviet invasion of Afghanistan.